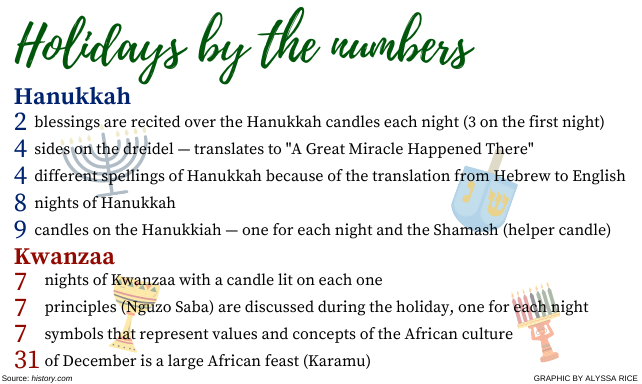 The first night of Hanukkah was 2 days ago, on Nov. 29, and Kwanzaa begins Dec. 26, but if I had to guess, I would say most of you reading this wouldn’t know that.

The United States is considered a “melting pot” of cultures and religions, yet there is a serious problem with the underrepresentation of winter holidays that do not involve elves and their North Pole workshop. The little representation these holidays do get often carries the heavy influence of Christmas as a last–ditch attempt to gain some sort of recognition and acceptance in a country that is all about Santa Claus and magical reindeer.

Take Hanukkah, for example. According to Brandeis Now, Hanukkah is actually considered a minor holiday for Jews, but it is one of the most widely celebrated by American Jews. With the popularity of Christmas, Jews feel the need to fit in, changing and adapting Hanukkah to fit the commercialization of the winter holidays.

According to Jewish News Syndicate, traditions such as gift–giving and using colorful candles on the Hanukkiah are uniquely American traditions brought on by the overwhelming popularity of Christmas.

Reform celebrations of Hanukkah have also been changed to focus more on free conscience, faith in God, loyalty to the state and an ethics of peace and reason, as opposed to classical celebrations focusing on rededication of the altar and rebuilding of the Temple in Jerusalem.

Hanukkah is more well–known than Kwanzaa, but the intent behind the celebrations has transformed over the years, shifting from a simple celebration to an industry that desperately tries to keep up with Christmas.

While the traditions of Kwanzaa remain largely unchanged, the holiday as a whole is rather underrepresented, with the majority of people knowing its name but not the meaning behind it.

A survey of 3,000 people by Fox News found that only 3% plan to celebrate Kwanzaa in 2021. Most people, including myself, may not even know someone who celebrates Kwanzaa.

Because it is not a topic taught in elementary schools, a majority of students do not know the history or traditions behind the holiday. I encourage you to learn more about this holiday and its traditions. Websites, such as history.com/topics/holidays/kwanzaa-history, provide easy to read explanations about the key components of the celebration.

Even though everywhere we look we see red and green advertisements of “Ho Ho Ho,” movies, music, shows and every commercial item you can stamp a Christmas symbol on, remember there are other holidays too.

Next time you find yourself wishing someone a “Merry Christmas,” keep in mind that December is not all about Christmas, and wish them a “Happy holidays” instead.

Students should keep cameras on during Zoom classes