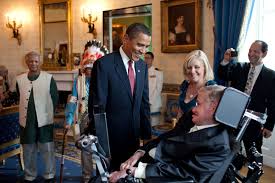 World-renowned theoretical physicist Stephen Hawking died peacefully on March 14, 2018 in his home in Cambridge. He completed his final contribution to science two weeks before his death, discussing the detection of multiple universes and a prediction of the end of the world.

When he was 21 years old, Hawking was diagnosed with Amyotrophic Lateral Sclerosis, which slowly weakens the muscles responsible for voluntary actions. Although doctors said he would not live much longer, Hawking surprised all, living for additional 55 years, meeting the average life expectancy for a male residing in the U.S.

While eventually being effectively paralyzed, Hawking’s natural gift of visualization allowed him to envision equations in terms of geometry and look at the universe from a unique perspective. Overcoming and exceeding all expectations, he completed his PhD in applied mathematics and theoretical physics, specializing in general relativity and cosmology.

His most notable work centered around the laws of thermodynamics of black holes, specifically how black holes create and emit subatomic particles until they exhaust all their energy, and his singularity theorems which predict the start of the universe with a big bang and end with a black hole.

His final work, A Smooth Exit from Eternal Inflation, predicted that the universe will slowly fade into the darkness as stars run out of energy, resolving possible flaws in his previous theories.

It also described a possible method to discover alternative universes through probes and spaceships. This may provide a solution to Hawking’s proposed end of Earth in 2600, allowing humans to colonize another planet and/or universe.

Hawking earned numerous accolades through his work with cosmology and relativity, but his legacy lives beyond the realm of science. Accepting the famous ALS Ice Bucket Challenge in 2014, he raised over $100 million dollars. Additionally, he expressed his concerns of complete nuclear destruction, genetically modified viruses, global warming and the rise of artificial intelligence.

Although Hawking has never won a Nobel Prize because his theories have not been directly proven, his contributions will be the foundation for future theoretical physicists, and his determination will continue be an inspiration to all.