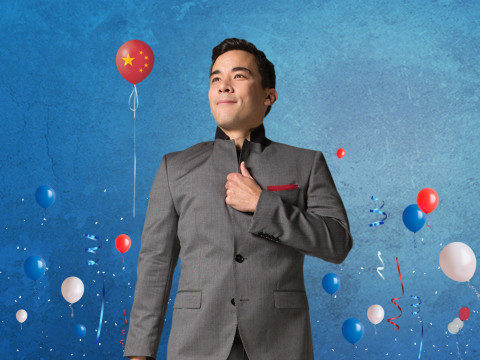 A sudden flash of blinding light. The glistening golden arches of the McDonald’s logo slowly descend from the heavens as the brass section pounds out a rousing jazz anthem. A tangle of fabulous dancers trussed up in the golden pin-curls and silk tuxedos of Old Hollywood twirl aside to reveal none other than Hillary Clinton, resplendent in white pantsuit, cruising to the front of the stage on a hamburger-shaped platform as a gaggle of bleached-blonde fast-food diners erupt into thunderous applause.

While it sounds like some sort of Baz Luhrman fever dream on steroids, that is an actual scene that actually happens in Tony Award-winning playwright David Henry Hwang’s new musical, Soft Power. I was in the second row. It was a religious experience.

The world premier of Soft Power opened at LA’s Ahmanson Theatre on May 16. According to the Center Theatre Group website, “Soft Power rewinds our recent political history and plays it back through a Chinese lens: a future, beloved East-meets-West musical.” Hwang uses the titular “soft power” (defined as “a persuasive approach to international relations, typically involving the use of cultural influence”) as an irreverent love letter to the Asian-American experience that’s equal parts pointed, ridiculous satire and a poignant examination of race, culture, heartbreak and identity.

The phrase “breaking barriers” is tossed around a little too much when it comes to theatre, but it’s pretty safe to say that Soft Power is breaking barriers with its form—I don’t think American theatre has ever seen anything like it. I’m just going to throw it at you: the first 20 minutes of the show run like a contemporary straight play in America, and the next two hours are a dream sequence of a Chinese musical from the future inspired by the events that happen in those first 20 minutes.

The musical segment is a playful subversion of the typical lens used to view Asians in theatre. While there have been a grand total of two musicals in the entirety of musical theatre about Asian-Americans—Flower Drum Song (1958), which flopped, and Allegiance (2015), which also flopped—the two most (and only) successful shows that strongly feature sympathetic Asian characters are The King and I (1951) and Miss Saigon (1989). And while most Asian theatre-lovers, including me, grow up eating, sleeping and breathing these shows, as our country transitions into a new age of racial awareness, we start to notice things, that are, in Hwang’s words, “pretty sus.” That’s not saying I love them any less. It’s just that … they lowkey demean the whole Asian race?

Most notably, both shows feature a “white savior” character that the whole plot hinges around—Anna, the female lead in The King and I, is a British nanny that the King of Siam (modern-day Thailand) hires to give his children a Western-style education, and the whole show focuses on her “civilizing” the “barbaric” Siamese, teaching the King how to run his country and how to treat his children. Real quote from a song that she sings in the musical: “But I come from a civilized land called Wales / Where men like you are kept in county jails!” (And you have no idea how many times I’ve yelled that line in a ridiculous Julie Andrews accent in the car, so that one hurts a lot for me.)

You can see the same thing from an opposite angle with Miss Saigon, in which Chris, an American GI, falls in love with a Vietnamese girl named Kim during the last days of the Vietnam War, fails to save her at the fall of Saigon and goes home to marry a white woman, forcing Kim to actually kill herself so that he will be forced to take custody of and make a good life for the child that he left her with.

This whole trope results almost purely from looking at the lives of Asians through “white” eyes—and that’s the key to understanding the core of Soft Power. The play segment of the show replays the events of the 2016 presidential election (which I lovingly refer to as The Biggest Stress-Induced Stomachache of My Life) from the perspective of David Henry Hwang himself, an Asian-American who has been exposed to the glorified Eurocentrism that pervades almost every aspect of American culture.

The “Chinese” musical, though, flips that perspective on its head: people and places are given extremely generic “American” names like Hollywood Airport, Bobby Bob and Randy Rae, and almost every Caucasian character is played by an Asian actor in a blonde wig and a ridiculous, stereotypical “white” outfit—overalls, a hillbilly hat and a gun, or sweatpants, an American flag tank top and a backwards baseball cap.

There’s even a news panel from CCTV (the Chinese equivalent of CNN) with an Asian moderator and three Asian panelists that occasionally refer to a fourth, white panelist to give his own “cultural perspective” with condescending hilarity. Not to mention a parody of the quintessential Americana fast-talking musical patter song in which the Chief Justice of the Supreme Court cheerfully and very confusingly explains each convoluted facet of the voting system and the Electoral College.

And while saying it out loud sounds completely insane, how come I didn’t feel that way when I watched a British nanny travel to an unnamed palace in Siam and teach a bunch of white actors in yellowface with character names like “Lady Thiang” and “Lun Tha” how not to be “barbarians” in the King and I movie?

The cast and creative just sparkle in this show. Conrad Ricamora, who you might know from How to Get Away with Murder, stars as Xue Xing, a Chinese film executive who’s having an affair with Hillary Clinton (that’s a sentence I never thought I would write). He’s the butt of a lot of Chinese jokes in the play segment, but, as soon as the dream sequence hits, he drops his (flawless) Chinese accent, becomes the main character, and leads the audience through the crazy, whirlwind plot of the musical with astounding sensitivity and clarity. Not to mention a gorgeous, velvety baritone. I will EAT that vibrato.

Also amazing is his co-star, Francis Jue, who plays Hwang’s autobiographical character, DHH. He personified the Asian-American experience in such a beautiful way—funny without being disrespectful, profound without getting preachy, and, most of all, true-to-life. There was a moment when Xue Xing started talking to him in Chinese, and he just nodded and smiled in the way that every Chinese-American kid grows up doing at large family gatherings, then immediately started frantically Google Translating on his phone when Xue Xing turned away. While saying it puts a dent in my life goal of trying never to act or sound even remotely like Holden Caulfield, “that killed me.” And then, there was his big solo in the Act One finale. I’m not going to give anything away, but the makeup on my face was concentrated around my eyes when it started and it was mostly on my cheeks by the end. I looked like a club singer at a Gatsby party. I was a mess.

And then there’s Alyse Alan Louis, who plays Hillary Clinton. While she herself killed it with a crystal-clear belt and crazy dance skills (I never knew I needed to see Hillary Clinton tap dancing in a red zoot suit and twerking on a hamburger in the same two-minute window), her character ended up being my only problem with the musical. I thought it was really funny at first that Hillary was a character in the show, but as Act Two went on, she actually ended up being a really involved part of the plot and the female lead of the whole musical. I just think that there should have been a female Asian-American lead in a story just about the Asian-American experience, and replacing what should have been a strong, female, Asian role model with a weird caricature of Hillary Clinton just didn’t quite work out for me.

That being said, the simple fact that there actually is a story just about the Asian-American experience in musical form that’s actually playing to packed, multicultural audiences in a top-tier theatre is an insanely progressive step for American theatre (that, frankly, should have happened years ago, but let’s face it, I’m just glad that it’s happening now). And it’s actually done well, which, in an age of mediocre regional theatre premiers, is a breath of fresh air: Jeanine Tesori’s electric score, Sam Pinkleton’s vivid choreography and Leigh Silverman’s visionary directing make the entire show.

Visual and creative arts and their impact on students