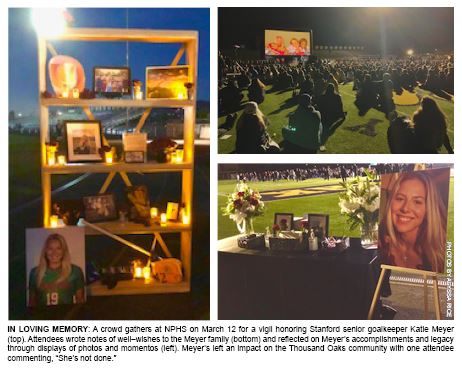 The Stanford community was left stunned on March 1 when the girls soccer team captain and senior goalkeeper Katie Meyer was found dead in her dorm room. The cause of death was later ruled to be suicide.

Meyer is known for leading Stanford to its NCAA championship win in 2019, with two saves in the penalty shootout against North Carolina. Her celebration of the saves quickly went viral and she has remained an integral player for the Cardinals since.

“I’ve never seen someone who’s put so much heart and soul into so many different aspects of her life,” said Stanford senior and Meyer’s teammate Sierra Enge in an interview with Today.

Stanford hosted a vigil on March 2 on its soccer field in Meyer’s memory and the Stanford women’s basketball team wore wristbands with Meyer’s initials during a game on March 3. Many soccer and other sports teams nationwide followed suit, standing in solidarity with Meyer’s family.

“Our entire community is devastated by [Meyer’s] death, and we share our deepest condolences with [Meyer’s] family and everyone who knew her at Stanford, across the country and around the world,” according to an official statement from Stanford University. “[Meyer] touched so many lives.”

Meyer was a Ventura County native, graduating from Century Academy and playing football and soccer at NPHS as a placekicker and goalkeeper, respectively. NPHS hosted a memorial service in her honor on March 12 as a way for the local community to gather and remember Meyer’s legacy.

“The tears will come and go, but [Meyer’s] light will shine for eternity,” read the service announcement.

But beyond the tears of sorrow, the tragedy revealed a lingering problem in collegiate sports: the pressure student–athletes face when playing at such competitive levels.

“There’s so much pressure on athletes, especially at that high level balancing academics and a highly competitive environment,” said Meyer’s mother, Gina Meyer in an interview with NBC. “There is anxiety and there is stress to be perfect, to be the best, to be number one.”

According to USA Today, a 2019 survey by the NCAA revealed that only 37% of collegiate female–athletes felt satisfied with the level of mental health care they received. The reality is that many high schools tell a similar story.

Student–athletes face pressure in many aspects of their lives, as they are expected to keep their grades up to be eligible to play and still perform their best at every competition. Mental health services remain crucial in helping them be and play their best.

“We want to normalize that we all struggle at times and that it’s okay to ask for help,” siad Garret.

Conejo Valley Unified School District established Wellness Centers at each of its high schools as a way for students to have easy access to mental health resources when they need it, especially following the struggles accompanied by COVID–19.

“Everyone is important,” said mental health clinician Jennifer Julian. “You are not a burden. We are here to support you and no problem is too small.”

The Wellness Center hopes to provide easy access to mental health resources for students, removing the extra barriers that often come with gaining access to these tools.

“They need to know it is okay to not be okay and to ask for help and reach out,” said Julian. “I would like them to feel like they are not alone, and they don’t have to struggle alone.”

The disadvantages of remote learning