Recently, teachers in West Virginia striked for nine consecutive days from Feb. 22 to March 6 for higher wages and better benefits, especially regarding their health insurance from the strained Public Employee Insurance Agency.

West Virginia teachers returned to work with a five percent pay raise, according to NPR. Through news and social media, the West Virginia strike has inspired educators and teacher union leaders in Oklahoma to act on their similarly low average teacher salaries, ranked 49th in the nation.

“And in a sign of social media’s influence on the labor unrest spreading among educators across the U.S., [Oklahoma teacher] Morejon was with union leaders Thursday [March 8th] who presented a demand to Oklahoma legislators: Raise teachers’ pay by April 1, or teachers statewide will go on strike on April 2,” wrote Matt Pearce from the Los Angeles Times.

A different study from the Bureau of Labor Statistics shows that Oklahoma teachers are actually the lowest paid in the nation, according to Bloomberg.

“Oklahoma educators have reached a breaking point,” said Alicia Priest, president of the Oklahoma Education Association, which represents teachers across Oklahoma, in a televised news conference. “Believe me, we want to be in our classrooms. We do not want to shut down schools and leave our classrooms to come to the Capitol. But we will … We’re putting lawmakers on notice.”

Some Oklahoman Republican representatives such as Greg Treat, Republican majority floor leader, agree that teachers deserve better pay but argue that the Democrats have prevented passing legislation to help the teachers.

“Greg Treat, Republican majority floor leader, said [on March 6] that ‘teachers deserve a pay raise,’ and accused Democrats of obstructing efforts to pass one,” wrote Josh Eidelson from Bloomberg. However, Oklahoma Democrats oppose Republican proposals because they believe the bills are “either unfunded or based on regressive taxation of gasoline and tobacco that would hit the state’s poor hardest,” according to Bloomberg.

Bills proposed to increase teachers’ pay includes House Bill 2403, which has Republican support (Republicans have a three-to-one advantage in the 100 member Oklahoma House).

“There are currently multiple options available to help provide a pay raise without requiring 76 votes and help from House Democrats, including House Bill 2403, which would provide $106 million and is awaiting a hearing in the Senate,” said Oklahoma House Speaker Charles McCall. “We passed a bill off the House floor that would provide an additional $22 million in revenue, and there are other ideas being discussed that could potentially help us fully fund a substantive pay raise for teachers this session.”

Regardless, the Oklahoman teachers have not received a pay raise since 2008 and the state’s education budget has been cut by about twenty-eight percent over the last 10 years, according to the National Education Association and Joy Hofmeister, Oklahoma State Superintendent of Public Instruction, respectively.

Analysts and reporters have noted that the movement has gained more momentum in conservative states such as Oklahoma and West Virginia.

“We’re seeing this in red states, we’re seeing this in states where teachers don’t have the right to collectively bargain,” said Jon Shelton, an assistant professor at the University of Wisconsin-Green Bay who has studied teachers’ strikes.

“Strike fever appears to be catching on among public-school workers in conservative states where lawmakers have curtailed the strength of public-sector unions,” wrote Pearce. “That might seem paradoxical. But as it turns out, weakened unions are not necessarily the same thing as weakened workers.”

The Supreme Court is currently deciding on a case, Janus v. American Federation of State, County and Municipal Employees, that could handicap public unions, over the constitutionality of “fair share” fees: the idea that public employees who aren’t part of a union benefit from its bargaining and should thus pay fees to the union as well, allowed by 1977 Supreme Court case called Abood v. Detroit Board of Education.

At a news conference on March 8, Kim Morris, a pre-kindergarten teacher from Mannford, Oklahoma, said that because of her school’s limited budget, the school can afford to only keep the light on during part of the school day and maintain a 63 degree temperature to save money on heating, according to the Los Angeles Times.

“We’re coming out of recessionary times, and states have not built back up their funding. It’s kind of a boiling point,” said Katharine Strunk, professor of education policy at Michigan State University. “There’s a whole question around, ‘how do teacher and unions express their voice?’” 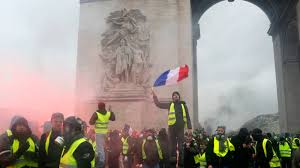