This story is an extended version of the one printed on page 9 of our March issue.

After the Feb. 14 shooting at Marjory Stoneman Douglas High School in Parkland, FL that killed 17 people, students across the country began speaking out about the government’s handling of school shootings. From survivors at MSD to WHS’s very own students, the young generation has been making its voice heard.

Students from MSD, including Emma Gonzalez, Cameron Kasky and David Hogg, started a movement called “Never Again” to fight for safer schools and protest the government’s response to the shooting. After the shooting, they began taking interviews with media outlets and utilizing social media to spread their message.

In a rally in Ft. Lauderdale on Feb. 17, Gonzalez spoke out against the government, saying “the people in the government who are voted into power are lying to us and us kids seem to be the only ones who notice and are prepared to call B.S.” Her speech went viral and she now has over 1.1 million Twitter followers.

“Companies trying to make caricatures of the teenagers nowadays, saying that all we are self-involved and trend-obsessed and they hush us into submission when our message doesn’t reach the ears of the nation, we are prepared to call B.S.,” said Gonzales in her speech. “Politicians who sit in their gilded House and Senate seats funded by the NRA telling us nothing could have been done to prevent this, we call B.S… That us kids don’t know what we’re talking about, that we’re too young to understand how the government works. We call B.S.”

The “Never Again” movement has grown to include students all across the country. Tweets have been tagged with hashtags such as #neveragain, #marchforourlives and #msdstrong to show support and solidarity.

In response to the growing movement, MSD students planned a march in Washington, D.C. Sister marches are happening in Los Angeles, Ventura and other cities across the country as well.

“On March 24, the kids and families of March For Our Lives will take to the streets of Washington DC to demand that their lives and safety become a priority and that we end gun violence and mass shootings in our schools today,” stated marchforourlives.com.

In Texas, a senior at Dripping Springs High School, Riley Ruchti, helped organize a nonpartisan demonstration in response to the Parkland shooting.

“Our walkout was not an anti-gun protest,” Ruchti said. “It was created first and foremost to stand with Parkland students, who gave us the courage to say that even though we didn’t agree with each other on what exactly should happen, we wanted something to happen. And we wanted to be taken seriously.”

“[The meeting] was really inspiring because I met a lot of people who are just as passionate about activism as I am,” said Victoria Barrios ‘18. “We were talking about how this movement is our movement— it’s a movement by teens. So really they’re giving us a platform, but we have to decide what to do with that and … do our own thing as long as it’s reasonable.”

Aside from Stern, Bob Weiss, a father-turned-activist when his daughter was killed in the Isla Vista shooting of 2014, and Rob Quan, one of the organizers of the Los Angeles March for Our Lives, attended the meeting to talk with the students.

“You only have one vote. It’s not going to decide an election, … but you can go out there and get more votes,” said Quan in a presentation during the meeting. “We’re up against people who have a lot of money, but we can offer the many.”

The group settled on creating one central Twitter account (@neveragainsocal) to link the walkouts together, as well as each creating their own social media accounts to spread the word.

WHS attendees, including Jillian Butler ‘19, Ritika Iyer ‘18 and Quinn Muscatel ‘20, planned the walkout that took place at WHS on March 14. The walkout corresponded with other walkouts the same day across the country.

“The message [behind the walkout] is that … we’ve had enough and we want to see change,” said Muscatel. “I think that students need to stand up if we want the government to change something, and I think that this is one of the most beneficial ways to show that there needs to be a change.”

The walkout was not based on the ideology of one political party; it was meant to be a way for students to band together and peacefully express their desire for safer schools.

“This walkout [was] bipartisan, so it’s not political at all. [We] think that we need to increase school safety and raise awareness to the safety within our schools,” said Butler. “I hope that the walkout just inspires more students to stand up for what they believe in and to use their voices in a positive way.”

WHS administration supported the students’ right to free expression, working with the students as they planned the walkout.  Assistant Principal of Activities Heather Godfrey met with students during CPT on Feb. 28 to discuss student visions for the event and ensure the safety of students at the walkout.

“I would be happy if there was no walkout and that we just did these things because they’re things that we should be doing,” said Godfrey. “But we are looking to support kids and … support their voice … I want kids to feel like they have a voice and be heard, and if anything, I want everybody to realize that we are all in this together.”

Additionally, Principal Jason Branham said that “the safety of our students and staff is [his] number one priority, period.” Administration worked with the students to make sure that the walkout was conducted safely and that no students left campus. Staff and teachers have shown “nothing but support” for the movement.

“You already saw the roots of some of this stuff happening in our nation in general … [but] I think that the tragedy in Florida just kind of took it to the student level a little bit,” said Branham. “If you use your voice in an appropriate manner and conduct yourself in a way to do that, then we can get to a place where we can have actual thoughtful conversations and discussions about things.”

The March 14 walkout, organized by Women’s March, lasted for 17 minutes. At WHS, participating students left class at 10 a.m. and “walked out” to the amphitheater where students could sign a banner to send to MSD and send kindness grams to people on campus.  Iyer, Barrios, Rylinn Cafferty ‘20 and Jasen Cummings ‘20 gave inspirational speeches on the steps of the ampitheater, and many students brought handmade signs with messages like “#never again,” “Enough is enough” and “Protect people not guns.” 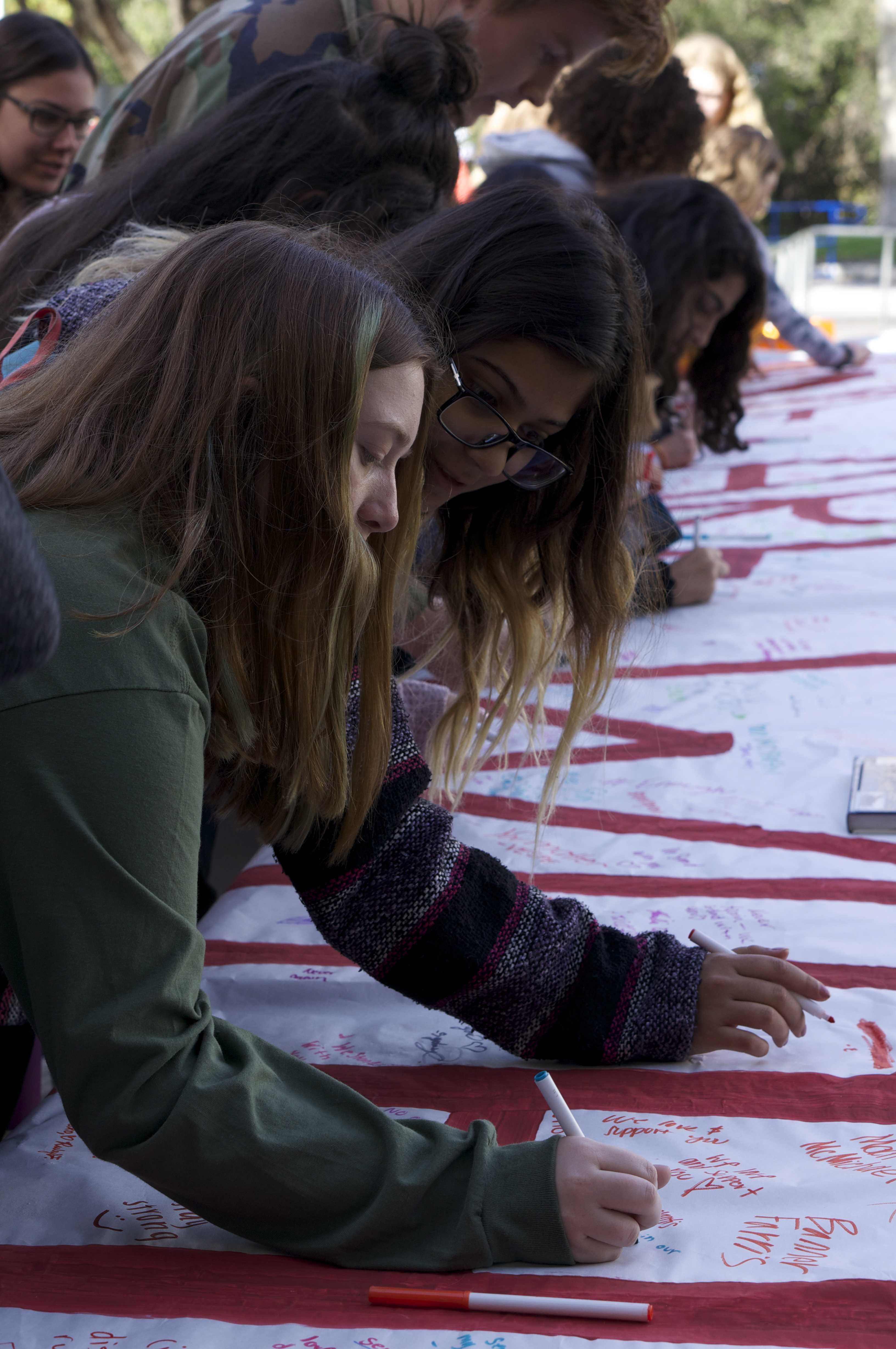 The April 20 walkout, sparked by the work of Lane Murdock, a sophomore from Connecticut, begins at 10 a.m. and lasts the rest of the school day; it takes place on the 19th anniversary of the Columbine shooting.

Murdock started a change.org petition, requesting signatures of those participating in the walkout; since its creation, more than 250,000 people have signed it.

“The majority of teenagers have no right to vote, leaving our voice unheard. The government does not hear or care how these tragedies affect our lives,” said Murdock in the introduction of her petition. “The violence of guns is being performed in our schools and our communities. Not the senate floor. As the future of America, it is time for teenagers to speak their minds and put their frustration into action.”

WHS twins Amy Steinman ‘19 and Julia Steinman ‘19 organized a letter writing campaign at WHS to send letters of support to the students at MSD. They were compelled to do something in response to the shooting because they grew up in Parkland, FL and still know people there.

“It’s really shocking to see the name of your hometown on the news,” said Amy Steinman. “In light of [the shooting], our school wasn’t really doing much, and they didn’t mention it at all over the announcements … In Parkland we see [students] all rising up and speaking out about this finally, so we’re like, you know what, let’s show them some support because they need that right now.”

The Steinmans talked to the English department, and some teachers, including Lora Novak, Danielle Sanford and Deana Fechner, gave up class time for students to write the letters in support of students at MSD.

“I think just supporting [the Steinmans] in what they decided to do about something that they felt strongly about … was important,” said Sanford. “And offering a little bit of class time to facilitate that in order to support my students I thought was a good thing to do.”

Many students and teachers participated in the letter writing.

“It was a good way to actually get to the students because I feel like a lot of the thing[s] that have been going on don’t have a direct effect on the people who have been affected by this, so I thought it was cool,” said Molly Beals ‘19, who participated in the letter writing.

There are many other ways students can take action in their community, no matter the issue or what their views are. Although many students cannot yet vote, there are a plethora of ways to make one’s voice heard.

“If you use your voice and your methods in appropriate ways, you can enact change,” said Branham. “Change occurs when people utilize their voice in an appropriate manner which causes people to listen.”

In California, minors can pre-register to vote at age 16 or 17, and then on their eighteenth birthday, they will be automatically registered to vote.  In some other states, including Virginia, Hawaii, Washington and Nevada but excluding California, 17 year-olds are allowed to vote in primaries and caucuses. Other states allow this only if the citizen will be 18 by the time of the general election.

“I think it is really up to us to not only care about big government officials such as the president, but [also] to really be involved in our community and the politicians we elect close [to us],” said Barrios. “As youth, we can understand who’s representing us, register to vote, vote and voice our opinions.”

In addition to voting, students can contact state senators to express their opinions on any subject or send letters to the Thousand Oaks Acorn to be considered for publication.

No matter what a student’s views are, Butler emphasized how it is important for students to “be more aware of all these issues and just be kept up to date.”

“Students can continue to be involved by just keeping up with the news and making sure that whenever an issue occurs that they strongly believe against, they decide to take action upon that,” said Butler. “One day we’re all going to be adults, and we’re going to be the ones in charge, so we won’t have anyone to rely on. So we need to know how to speak up and use our voices in an effective way.”

Teachers’ lives outside of school

Help for the holidays: gifts