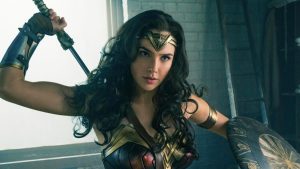 51 iconic movie characters such as the Joker, James Bond, Hannibal Lecter, and Jack Sparrow pop up with the Google search “Top movie characters of all time.” However, only eight of these classic lead roles are female.

Young girls continually look up to women in their favorite films as role models, yet the clear underrepresentation of women as strong, independent characters paints the picture into female viewers minds that this is “normal,” due to the fact that men are just represented more in popular culture.

Yet, in recent years, women have emerged as more than just the stereotypical “sexy

sidekick” associated with many female characters in action and thriller films, breaking the restraints on female employees of the film industry.

According to San Diego State University’s Center for the Study of Women in Television and Film, about 29 percent of the highest-grossing movies in 2016 featured females as the lead role. Although this percentage may appear low, it is an increase from 2015, where the amount of female leads was only 22 percent.

The character stereotypes that hold back women in the film industry are being broken in recent years more than ever by the various types of female characters that are being portrayed today, such as the unconventional high school student Samantha (Zoey Deutch) from Before I Fall, quirky Louisa (Emilia Clarke) from Me Before You, and the four kick-butt ghost hunter women in Ghostbusters.

The most prominent example for a new female character escaping the normal gender standards placed on women is Wonder Woman (Gal Gadot). Simply by being a female woman superhero, Gadot breaks through the standards associated with the title “superhero,” as it is heavily dominated by men, with little women in comparison.

For example, all the extremely successful superhero films are overwhelmed with male characters, generally with a subtle sidekick/love interest for the main, male character (i.e. Batman, Superman, Spiderman, Iron Man, Captain America). However, by proving that she can ultimately save the world solely through her strength and wit, Gadot proves she is more than just the first insanely successful female superhero lead movie, but also an intelligent, powerful persona.

Specifically in children’s movies, female characters are constantly escaping the “princess” role and joining the heroes title that is generally designated for male roles. These girls are adventurous and resilient, such as the nonconforming Moana and spirited sisters Elsa and Anna from Frozen, providing positive encouragement to girls who dream past the conventional road laid out for women.

A new and especially heartwarming role for little girls to look up to is Sophie (Ruby Barnhill) from the BFG, who uses her cleverness to escape sticky situations in cases where previous Disney female characters would wait for their “prince” to come.

To illustrate this discrepancy between genders in the film industry further, Netflix has even created a category for viewers titled “Featuring a Strong Female Lead” in order to emphasize and highlight the societal changes in modern years where actresses depict the most powerful role in more than just a few flicks per year.

Gender inequality in the film industry greatly deals with the gender of both the directors and writers of the film. According to the New York Times, about 18 percent of the dominant roles are women when males are directing or writing, however with females directing the leads are about 57 percent female.

Thus, the gender gap in films continues on in various aspects of the industry. Although it the inequalities still remain, this gap is slowly closing.