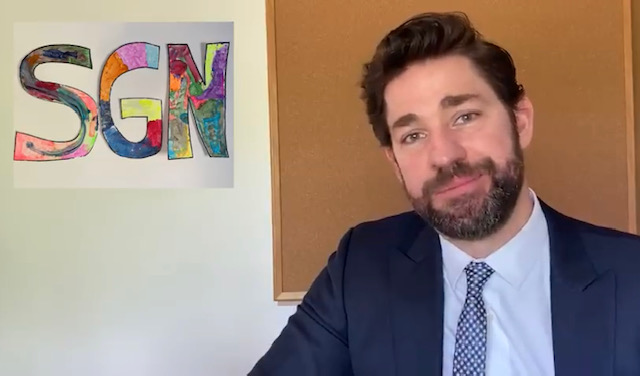 As the world is taken over by COVID–19 in so many aspects, one known area of influence has found their own ways to inspire and fight against its effects: celebrities.

Those with large followings have found numerous ways to connect virtually either to spread positivity or raise awareness. One of the biggest of these efforts comes from Some Good News. With nearly 65 million views, John Krasinksi formed a weekly news update in which he shares only the positives that have come from COVID–19.

“For years now, I’ve been wondering, ‘why is there not a news show dedicated entirely to good news?’” said Krasinski in episode 1 of Some Good News. “Desperately seeking my fix somewhere else, I reached out to all of you this week, asking … for some good news.”

Krasinski uses his new platform to not only share good news but also for dramatic virtual events such as virtual prom and graduation for seniors, a reunion with his castmates from The Office and a surprise from the Hamilton cast for a girl who was unable to attend the show in person.

Similarly to Krasinski’s show, Miley Cyrus formed a daily show on IGTV known as Brightminded. The show, which occurred every week day for a 20 day run, featured new celebrity guests in each episode who spoke with Cyrus on their perspectives.

“Since the show dropped, Miley has visited with celebrity guests including Hailey Bieber, with whom she spoke about sexuality and spirituality; Demi Lovato, who discussed anxiety and body image; and her Hannah Montana co–star Emily Osment, who took a trip down memory lane and shared some sweet secrets from their Disney Channel days,” stated Teen Vogue on some of the guest stars of Bright Minded.

Many services have been taking advantage of this online space. One example is from Jackbox Games who started Celebrity Jackbox: Games and Giving. In its ten–episode livestream run, a group of celebrities play Jackbox Games in order to draw attention to nonprofit organizations that are for COVID–19 relief. Some guests on the stream include Finn Wolfhard, Josh Hutcherson, Jack Black and Keke Palmer. Audience members can interact with the guests by voting and awarding bonus points to the players.

“On the show, celebrities will play Jackbox games from home via video conference, while celebrating a not-for-profit organization that is tackling the fallout from the crisis head on,” stated Jackbox Games on their website. “Every week, Jackbox Games will be donating $100,000 to the featured charity. In total, $1 million in donations is made possible.”

Additionally, many casts and groups are finding this time to be a perfect opportunity to reconnect virtually. The Pretty Little Liars cast held a reunion on May 15 in which they charged $15 a ticket or $90 for an individual stream with one cast member of your choice. All proceeds from it went to Feeding America.

Along with benefits like the Pretty Little Liars cast, many are choosing to reconnect to spread positivity for their followers. Some of the recent reunions include Big Time Rush, This is Us, Jonas Brothers, Fresh Prince of Bel-Air, Sonny with a Chance, High School Musical, Victorious, NSYNC and Harry Potter.

“It’s also a great time to capitalize on the ever–present nostalgia for the films and shows that made the stars famous in the first place, especially when their reunion is tied to a charitable cause,” stated Vanity Fair in an article on the new celebrity reunion trend.

A final aspect of influence is in new music about the COVID–19 crisis. Many artists have taken the time at home to produce new music that captures the feelings of this time period. Some of the ones that have gained the most popularity include “Stuck With U” by Ariana Grande and Justin Bieber and “Level of Concern” by Twenty One Pilots, both of which are donating a portion of their proceeds to a charity of their choice.

Celebrities are overall taking this time at home to reach out to their fans and support the community in any way they can.

“In a time of crisis like the one we’re currently living through, people tend to reveal their truest selves,” stated Vogue in an article. “This also applies to celebrities, many of whom are stepping up and putting their privilege to good use, assisting those who have had their health and livelihoods impacted by COVID–19.”

Help for the holidays: gifts

WHS gets into the homecoming spirit