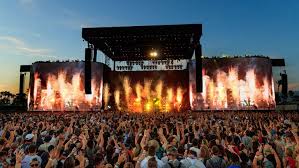 The Coachella Valley Music and Arts Festival has become a pop culture phenomenon in recent years, as music lovers from around the world travel to the desert in Indio, California for a weekend of music and festivities. The 20th annual festival will be on the weekends of April 12-14 and 19-21.

Each year, Coachella fans excitedly await the release of the lineup and while some immediately plan their trip, others make their decision based on the artists attending. Coachella 2019 includes rapper Childish Gambino, Australian rock band Tame Impala and pop sensation Ariana Grande headlining the three day festival.

Other than the headliners, however, certain people believe the lineup gets increasingly controversial. Without Frank Ocean, Justin Timberlake or Kanye West as many people predicted for this year’s lineup, there was expected disappointment. The last-minute replacement of Kanye West with Ariana Grande concerning a disagreement over stage design vexed potential attendees. Thus, many WHS Coachella fans are not surprised by the reactions from their peers.

“Last year, everyone was saying ‘trash lineup, trash lineup,’ too, but I thought it would still be fun and I still loved it,” said Malia Capen ‘19. “Everyone who performed was still good, so honestly, it’s probably going to be the same this year. I definitely don’t think it’s a trash lineup.”

Another point of contention for Coachella every year is the price of tickets and the overall price of attending the festival. For many people, $500 for a General Admission ticket is a hefty investment. Adding on living arrangements, food and clothes for the desert climate, total costs can be upwards of $2,000. Capen admits she spent over $1,500 total at the 2018 festival.

With many smaller artists attending this year, for people like Lam who like the music of the non-headliners, it’s a disappointment that prices are always so high.

“No, [the event is not worth the price] for sure,” said Capen. “I needed to get the experience once in my high school life, so last year I went.”

Many people are underwhelmed with the lack of A-list hip-hop acts. Childish Gambino represents the hip-hop scene as a headliner, but even Gambino has been mostly dabbling in psych-funk for the last few years.

Although the genre isn’t absent with the likes of Kid Cudi, Juice WRLD, Playboi Carti and Jaden Smith amongst the rappers attending, diversity in acts seems to be more important to this year’s lineup compared to previous years where rap reigned supreme.

“It’ll be interesting to see what Coachella’s core young audience thinks of the genre’s [hip-hop] relatively light representation,” said Andrew Unterberger in his article for Billboard.

Gone are the days of Coachella’s origins built on Pearl Jam and flower crowns, but as pop has recently dominated the festival, rock is making a resurgence. Along with Tame Impala, The 1975, The Interrupters and Weezer will all be performing, along with Mac Demarco to add a groovy twist to the rock sound at the festival.

“I feel like [the culture at Coachella] has changed a lot,” said Capen. “It felt a lot different last year. I didn’t feel like it was ‘mainstream’ or anything.”

The festival is also bringing in international flair this year with its first ever Korean pop group, K-pop giants, BLACKPINK, as well as its first ever Japanese pop act, J-pop trio Perfume, traveling overseas to perform in America. Fans of both groups are compelled to come solely to see their favorite artists live. Other international acts performing are HYUKOH, an indie K-rock group, and even British actor Idris Elba.

Although there’s controversy every year surrounding the festival’s lineup and costs, music lovers will continue to attend the festival to see their favorite artists perform and experience the coveted Coachella experience.