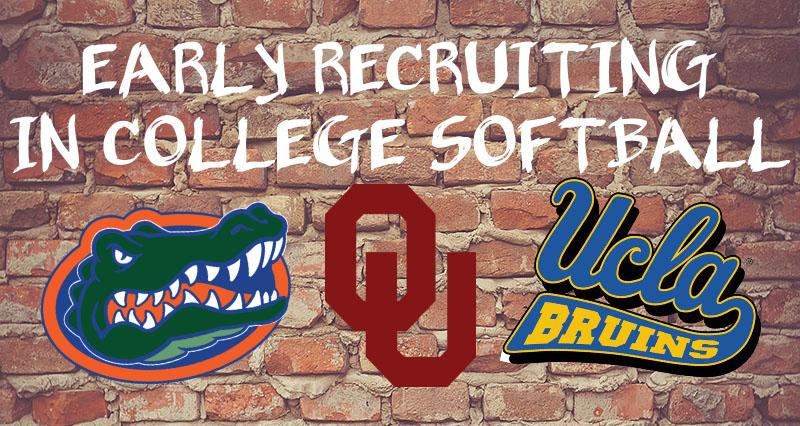 On Feb. 1, 11-year-old Alexia Carrasquillo made collegiate sports history by being the youngest player in any sport to ever verbally commit to college. A member of the graduating class of 2024, the sixth grader verballed to play softball at the University of Florida under head coach Tim Walton. Her decision to commit came a month after touring the campus, along with similar visits to UCLA and the University of Oklahoma.

Walton was already facing heavy criticism after committing two seventh graders in the fall of 2017. The decision to offer Carrasquillo a scholarship unleashed a fury among fans, coaches and players alike, all arguing that 11 is too early to have a young girl make a decision that defines the rest of her future, no matter the caliber of player.

The issue is not with Carrasquillo. Her talent and work ethic are unprecedented at her age, putting up numbers that are strikingly similar to the top collegiate players today. The issue lies in the culture that is being created when top college coaches verbal players that young.

Softball recruiting follows a different trend than most sports. College coaches are search for players to commit long before their senior year, with the top schools in the country committing most of their recruits in eighth or ninth grade. This is much different from popular college sports like football and basketball where a player typically waits until halfway through their senior year to announce which school they choose to play for.

Softball isn’t the only sport that commits players early, though. Soccer, baseball and swim have multiple players recruited as early as freshman year. The early commitments are overwhelmingly present in female sports.

The pressure this early recruiting culture has placed on young players is immeasurable. Stress and depression are becoming a rapidly increasing issue for these athletes, some even being burned out of a sport they once loved. Unfortunately, suicides are increasing among young athletes as well.

All of these problems connect back to the original issue of early recruiting. Verbal recruits have up to seven years to wait before they graduate high school. The chances the player coaches recruited at age 11 is drastically different at age 18 are very high. Grades are always a huge point of concern as well; a player might earn great grades in middle school, but become overwhelmed by the high school workload and let their GPA slip until they’re no longer eligible for the scholarship originally intended for them.

Recruiting a player that early might also create problems mentally. Once young athletes are committed, it’s possible they start slacking off in their sport and in school because their deal is already done. It’s easy to forget that a verbal commitment is non binding, and college coaches can revoke that scholarship at any time and decommit a player if expectations are not met.

Early commitments also harm players who do not find the right college for them until their junior or senior years. Colleges, especially for softball, are finding players and committing them early to lock down talent before another school beats them to it. With all colleges hunting for younger and younger players, spots on rosters and scholarships are quickly fleeting, leaving the older girls in the dust. If a player isn’t committed by the summer before her senior year, a common misconception is that the player isn’t good enough for any college to want her to play for them. Division 1 schools have almost all of their players locked down in a recruiting class before that class’ senior year starts, which limits the school options for players who decide to wait until they’re older to commit. Players feel all of these pressures too and start to get down on themselves both as players and individuals, thinking that they’re not good enough to play in college and all of their efforts to get recruited have been for nothing.

The dynamic is deadly, and it will only continue to get worse as college sports rise in popularity. However, a solution may be on the horizon for softball. In December 2017, a National Fastpitch Coaches Association (NFCA) convention was held in Las Vegas where the topic of early recruiting was the main event. A straw poll (one vote per institution) was taken among all Division 1 coaches and the results spoke numbers: 200 coaches to three wished for all recruiting contact to start Sept. 1 of a prospective student athlete’s junior year in high school, mirroring the newly implemented recruiting rules for lacrosse. Recruiting contact refers to all unofficial visits, correspondence, telephone calls and recruiting conversations at camps and clinics.

The NFCA stands fully behind new recruiting rules, but the legislation won’t become cemented into law until the NCAA votes it into effect. A section of the NCAA, the Student Athletic Experience Committee (SAEC), has proposed its own recruiting rules, but when placed in a vote against the lacrosse recruiting rules, the junior year start date strongly favored over the SAEC’s sophomore year start date. Now that the NFCA Division 1 coaches have reached a consensus over what route the new recruiting should take, the NCAA has been asked to make amends to the SAEC’s starting recruiting date, moving it from sophomore year to junior year.

With the discrepancies between the NCAA’s and NFCA’s desires for the future of recruiting rules, it is unclear when the rule changes will be implemented. Until that day comes, expect more sixth and seventh graders to be verballing to the top colleges. To learn more about how to stop early recruiting, check out the NFCA’s website or sign their petition.