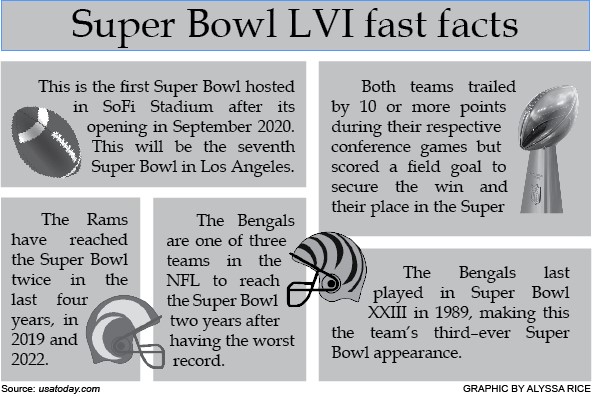 The 2022 Super Bowl kicks off at SoFi stadium on Feb. 13, at 6:30 p.m. ET. The Los Angeles Rams will go head–to–head against the Cincinnati Bengals. The game will be available on NBC and Peacock, as NBC will be pausing its streaming of the Winter Olympics to stream the game.

“I’m excited that the Rams are finally back in it after a couple of years,” said Aiden Szocinski ‘24. “Hopefully they will be able to come out on top this time … I’m looking forward to how the Bengals are going to put up against the Rams, because honestly, the Bengals have never really been a top team, and the Rams have always been relatively better in the past decade, so we’ll see what happens.”

As for how these two teams have gotten the opportunity to battle it out for the Lombardi trophy, the Bengals finished the regular season off 10–7, barely making the wildcard, while the Rams went 12–5, also securing a wildcard spot. When the playoff pressure of being eliminated kicked in, both these teams upset their opponents, hurtling their way to the Super Bowl.

“I like the Bengals. They’re good, but I never thought they would beat the Chiefs [in the Conference Championship],” said Marcus Lesser ‘22. “It’s crazy. I always thought the Rams would make it, but the Bengals don’t have a great team; [however], they have a great quarterback and play hard.”

“It’s crazy [and] it’s surprising,” said Lesser. “It just shows how surprising this season is, because [the Bengals] didn’t have a great roster. Getting last [record–wise in 2019] helped them, because they got [quarterback] Joe Burrow and [wide receiver] Ja’Marr Chase [in the draft], [but] before the season started, they were the least likely team to make it to the Super Bowl.”

As for the players competing, Rams quarterback Matthew Stafford will be clashing against Joe Burrow of the Bengals. This is Burrow’s second season in the league, after he was drafted in 2019, while Matthew Stafford has had 13 seasons of experience. Stafford played 12 of his 13 seasons with the Detroit Lions, in which he never won a playoff game, but in his first year with the Rams, he has taken them to the Super Bowl.

“I think it’s pretty incredible because it’s Matthew Stafford’s first year being on the Rams,” said Jack Braddell ‘24. “It’s pretty impressive that he was able to make it to the Super Bowl, and it proves that it was really the Lions holding him back, not himself.”

The Rams also have a star wide receiver on their roster, Cooper Kupp. Kupp finished off the season with 1,947 yards, marking him just shy of former Lions receiver Calvin Johnson’s record of 1,964 yards in a single regular season.

On the Bengals side, their stud wide receiver is Burrow’s former Louisiana State University teammate, Ja’Marr Chase. In week 17 of the regular season, Chase had 266 yards, 11 catches and three touchdowns, breaking the single game rookie receiving yards record and finishing with over 1,400 receiving yards on the season.

“I’m worried about Ja’Marr Chase,” said Lesser. “Obviously he is really good. [Chase] and Joe Burrow have a really good chemistry, so, yeah, it’s a concern. I think [cornerback] Jalen Ramsey will lock him up though.”

In terms of the Rams’ plan of attack against rookie wide receiver Ja’Marr Chase and second–year quarterback Joe Burrow, many fans speculate the Rams’ defensive line will need to be a major factor if they are to stop the LSU pair.

According to statmuse.com, in 2021 the Bengals’ offensive line allowed 55 sacks, the third most sacks allowed by any NFL team. On the defensive side of the ball, the Rams finished third in defensive sacks with 50.

“I think [defensive tackle] Aaron Donald is going to dominate,” said Lesser. “He’ll probably [create] a lot of pressure, since the Bengals don’t have a good offensive line, and hopefully [the Rams] can get some sacks … I think [the Rams can] get some stops, and they will be able to score on the Bengals.”

Rams and Patriots to face off in Super Bowl 53