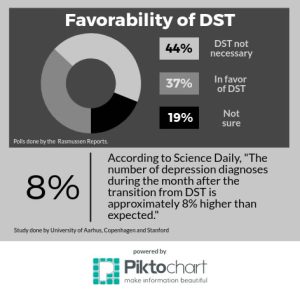 Nov. 5 marked the end of daylight saving time, so once again, we get home in pitch–black darkness, all because of a law that has outlived its usefulness.
Opposition towards DST is hardly new; according to a Rasmussen Poll that asked Americans if DST is “worth the hassle,” only thirty–seven percent responded favorably. DST should be replaced with Standard Time because of its many disadvantages.
One of the arguments for having DST is that it saves energy because brighter evenings lead to people turning on lights later, which saves money and electricity.
However, a study co–authored by Claremont McKenna College economist Laura Grant and Yale University economist Matthew Kotchen found that residential electricity use actually increased.
“We used a policy change in Indiana to estimate DST effects on electricity consumption. Prior to 2007, most Indiana counties did not observe DST,” said Grant. “By comparing households’ electricity demand before and after DST was adopted … we showed that DST had actually increased residential electricity demand in Indiana by one to four percent annually.”
As darkness increases from the annual end of DST, “millions can also expect feelings of depression, fatigue, irritability and poor sleep,” said Caitlin Millett, PhD graduate student in Neural and Behavioral Science at Pennsylvania State University.
“This form of mental illness, commonly known as the ‘winter blues,’ is Seasonal Affective Disorder,” said Millett. “It is estimated that one to two percent of North Americans have a mood disorder with a seasonal pattern.”
The U.S. National Institute of Health estimates that six percent of Americans suffer from the most severe type of SAD, roughly 19 million people, and another 45 million suffer from a lesser form of SAD.
The rough transition in spring, when clocks shift forward by an hour, has even more negative consequences, including an increased number of workplace injuries.
“In a study of mining injuries across the U.S., we found a spike in workplace injuries of nearly six percent on the Monday following the shift to daylight saving time,” wrote Christopher Barnes from the University of Washington and David Wagner from the Singapore Management University. “An even greater cause for concern is that the severity of these injuries, as measured by days of work lost…, increased by a whopping sixty–seven percent, representing 2,600 more workdays lost.”
Millions of dollars are also lost every year because of a decrease in productivity, proving DST economically unviable.
“In fact, a recent estimate of this effect put the cost to the American economy at over $434 million annually, simply from a subtle shift of the clocks,” wrote Barnes and Wagner.
These are correlations, not definite causes, but mounting evidence strongly suggests numerous drawbacks to the DST system both in the fall and spring.
Switching to a standardized time system without DST would mean less discrepancy between places that use DST and places that don’t. Currently, there are anomalies within the US— Alaska, Hawaii, Puerto Rico, the Virgin Islands, American Samoa, Guam and certain Native American reservations don’t use DST. Only 70 countries in the world use DST, so coordinating between time zones would be easier.
Using Standard Time consistently could potentially reduce symptoms of certain mental illnesses, electricity use and injuries in the workplace with very little cost.
The California State Legislature considered a bill in 2016 that would put the decision to remain on Standard Time year round to a vote, which was ultimately rejected by the Senate. However, seeing as how only a minority of the U.S. actually favors DST and the increasing new evidence against it, it is feasible that it could pass if brought up again.

Protests shake up the nation

Bitcoin: currency of the future