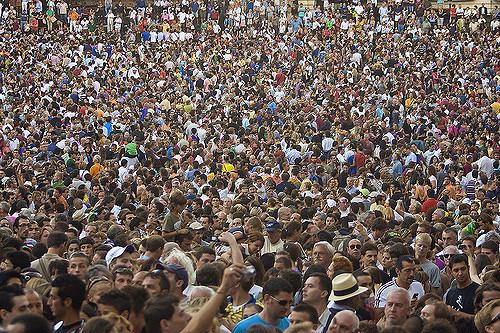 There are many critical environmental issues from pollution to extinction, and a leading cause of all these problems is the overpopulation of humans. In short, humans are causing the Earth’s deterioration.

Until now, there hasn’t been a more severe mass extinction of species since the dinosaurs,  but the human population is causing this to progress 1,000 to 10,000 times quicker than normal.

“Compared to the natural background rate of one extinction per million species per year, we are now losing 30,000 species per year, or three species per hour, which is faster than new species can evolve,” according to the World Resources Insitute in Everything Connects.

With only 2.5 percent of freshwater covering planet Earth, over 1% of water resources are too contaminated to be ingested by humans, leaving less than one percent of the consumable water to be split among more than 7.7 billion people as of 2019.

“Freshwater is the most fundamental finite resource with no substitutes for most uses, yet we are consuming fresh water at least 10 times faster than it is being replenished in regions of northern Africa, the Middle East, India, Pakistan, China, and the [United States],” according to Everything Connects.

Because of the immense amount of people, there is an excess of pollution through the burning of fossil fuels, greenhouse gases and littering, which is damaging natural ecosystems that once occupied a large portion of the Earth.

“Due mainly to warming temperatures, acidifying oceans and pollution, close to thirty percent of the ocean’s reefs have already vanished since 1980, including half of the reefs in the Caribbean and 90% of the Philippines’ coral reefs,” as stated in Everything Connects. “…Scientists forecast that Australia’s Great Barrier Reef may be dead by the year 2050 and all coral reefs could be gone by the end of the century.”

Not only is the degradation of Earth’s nature an issue, but the overpopulation of humans also threatens many aspects of everyday human life.

“A large [portion] of the world’s population growth occurs in less developed countries… [stretching] the resources these countries have … resulting in less access to medical care, fresh water, food and jobs, all resulting in a fall in life expectancy,” according to Renewable Resources Coalition.

While there are negative impacts of overpopulation on the planet, there are many organizations that are trying to compensate for the damages done.

“The Population Institute is an international non-profit organization that seeks to promote universal access to family planning information, education and services,” according to The Overpopulation Project, an organization studying environmental impacts and seeks to find solutions. “Through voluntary family planning, The Population Institute strives to achieve a world population in balance with a healthy global environment and resource base.”

The most effective method to acheiving a stable population rate is to average one child per family, which can potentially reduce the population to less than four billion by 2100.

“It is time to realize that there is a tradeoff between quality of life and quantity of life,”said Alon Tal in the Huffington Post. “In a planet with limited resources — sustainable growth is an oxymoron. Of course humanity could all shift to vegan diets, forgo national parks and crowd in a few more billion people, hoping that new levels of efficiency will allow us to survive. But it is well to ask if this really is the kind of world that we want? There is much we can do to reduce the suffering caused by human population growth. But recognizing that overpopulation is a perilous problem constitutes a critical first step.”