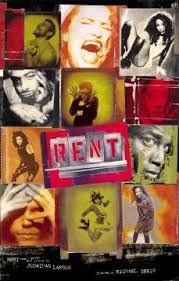 “In these dangerous times where the world is ripping apart at the seams,

By reaching out to each other and bonding as a community,

Rather than hiding from the terrors of life.”

These words, spoken by American musical theatre composer, lyricist and playwright Jonathan Larson, flashed briefly on screen before fading away to reveal the title of his most widely celebrated work, the Pulitzer Prize and Tony Award winning musical Rent. Followed by the downbeat to the show’s iconic opening line, it seemed like the perfect beginning to Fox’s Jan. 27 “live” musical broadcast.

I say “live” in air quotes because, as Sunday’s audiences unceremoniously learned in a cast-wide announcement before the first commercial break, Rent: Live was anything but.

Live TV musicals have been a uniquely American cultural experience since Rodgers and Hammerstein’s Cinderella was broadcasted over U.S. airwaves in 1955. But in past years, with the advent of Peter Pan, The Sound of Music, Hairspray, The Wiz, Grease and most recently, Jesus Christ Superstar, they’ve become a near-annual national event.

Larson’s sex/drugs/rock-n-roll opera sparked a musical revolution when it premiered on Broadway in 1996 by spotlighting AIDS, drug addiction and other instances of everyday tragedy faced by LGBTQ youth and starving artists on the New York streets (not unlike the Puccini opera it was loosely based on).

Rent: Live shou have held a similar effect, but, after up-and-coming singer-songwriter Brennin Hunt (The X Factor), who played the lead role of Roger Davis, rolled his ankle in the last 15 minutes of Jan. 26’s filmed dress rehearsal, Fox decided to air the dress rehearsal footage instead of broadcasting the show live as planned.

This was problematic for a few reasons. First of all, the whole draw behind a live TV musical is that it is being performed on-location at the exact same time that the viewer is watching from their own home. Just like live theatre, anything can happen and the show grows together with its viewers. Taking that away left most viewers sorely disappointed.

Second, Broadway thrives for eight shows a week because of understudies and standbys. The entire cast still performed live for the on-location audience, including Brennin Hunt in a wheelchair. The fact that Fox didn’t hire anyone to stand in for the leading role of their most-hyped broadcast event of the year, combined with their choice to air rehearsal footage rather than perform live-as-planned with one of the main characters in a wheelchair, was a huge mark of unprofessionalism for me.

But most of all, the dress rehearsal of a show is never meant to be publicly seen. Sure, it was filmed in front of a live audience, but only to test the camera angles and the audience dynamic for the real deal. The performers were all (very reasonably) saving their energy for the broadcast, and no one truly gave one hundred percent vocally, dramatically and physically because they didn’t want to burn themselves out before the next day.

Removing the cast and crew’s opportunity to present what they had been preparing for months was a significant drawback for the welfare of the show, like airing the warm-up before an Olympic event instead of the competition itself. That being said, Rent: Live was still an evening packed with as many highs and lows as the plot of the musical itself.

First, the highs: in a callback to last year’s success of Jesus Christ Superstar, in which NBC turned to actors with Broadway and music rather than film resumés, Rent: Live boasted a star-studded cast, many with experience in musical theatre. The cast standout was Tony-nominated Broadway actor Brandon Victor Dixon (Hamilton), who delivered a emotionally charged performance as the MIT-expelled computer genius Tom Collins.

Other Broadway-experienced crowd favorites were Vanessa Hudgens (Gigi) as bisexual performing artist Maureen Johnson, who was vocally tight but delighted nonetheless by infusing the role with her own girlishly melodramatic twist, Jordan Fisher (Hamilton), who delivered a fresh if slightly forgettable new take on the show’s narrator, amateur filmmaker Mark Cohen and Keala Settle (Waitress), who brought the house down with her heartrendingly electric vocals as the Seasons of Love soloist.

The rest of the cast, who hailed mostly from music and TV, also didn’t disappoint: singer-songwriter Tinashe (The X Factor) oozed youthful sexuality as Mimi Marquez, and, despite her inexperienced singing voice, no one captured the audience’s hearts like drag queen Valentina (RuPaul’s Drag Race) as the selfless Angel Schunard. And, of course, notwithstanding some slightly wooden acting, Brennin Hunt tackled Roger with an amazingly hard-rock vocal edge, even with a broken foot. Other production highlights included Jason Sherwood’s atmospheric, automated set and Angela Wendt’s refreshingly updated costume design.

Aside from the whole not-being-live thing, though, the production had manifold problems, crowning Rent: Live as the lowest-rated live musical broadcast in TV history. The sound quality was far below industry standard, which wasn’t excusable considering that the show was pre-recorded anyway. This was a major failing on Fox’s part not just because the actors, in many cases, couldn’t be heard over the blaring instrumentals, but also because the new orchestral arrangements written especially for the event couldn’t be properly showcased.

The audience, too, had obviously been instructed to cheer as loudly and frequently as they possibly could, at times even drowning out the actor, which made the show seem less like a theatrical production and more like a rock concert. Interrupting a poignant moment in the score to give audience members gimmicky fake candles to hold and cheering after the death of a main character because an actor hit a high note while mourning seemed especially inappropriate. Not to mention the seemingly random censoring of the show’s risqué source material, and a troupe of edgy hip-hop backup dancers who, though talented and well-choreographed, were included in some numbers for no apparent reason and detracted from the intimacy of the tight principal cast.

The show (literally) closed on a high note, though, with the original Broadway cast of Rent joining the live cast for one final, truly live performance of the show’s most beloved anthem, Seasons of Love. And though the show’s last affirmation of “no day but today” was slightly marred by the evening’s proceedings, at its core, Rent: Live was a lovable hot mess that ultimately did what it set out to do — paying an affectionate tribute to Jonathan Larson’s “la vie bohème.”

Our world cannot turn into Jumanji