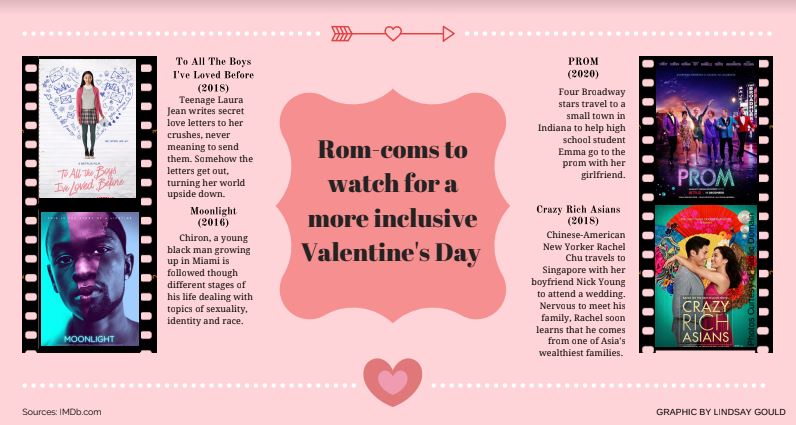 For years, the romantic comedy (rom–com) movie genre has been filled with stereotypical characters and clichés, but not anymore.

Movies today are breaking barriers in the industry by including more diverse protagonists in their love stories.

The rom–com genre began its rise to the forefront of mainstream media between the early ‘90s and late 2000s. Favorites like Gary Winick’s 13 Going on 30 and and Gil Junger’s 10 Things I Hate About You easily captured the attention of viewers, yet many films incorporate little to no diversity among their central characters.

No longer in the background, films are beginning to highlight the LGBTQIA+ community in leading roles, specifically among young adult characters. With Greg Berlanti’s Love, Simon and Ryan Murphy’s Prom, romance movies are beginning to showcase inclusivity.

“It’s incredible that they are finally incorporating more diverse [characters] and are including inclusivity into their media,” said Andy Lynch ‘23, member of the LGBTQIA+ community.

Asian culture has been highly recognized with the success of Susan Johnson’s To All The Boys I’ve Loved Before, based on the young adult romance trilogy written by Jenny Han. In addition, the all Asian cast of Crazy Rich Asians not only broke stereotypes, but broke box office records, making it one of the highest grossing romantic comedies of all time.

“Certainly for Asian American audiences, this is a signal moment for us,” said author and CNN contributor Jeff Yang in an article written by the Los Angeles Times.  “It really is the first time that we’ve seen in a contemporary setting an all–Asian cast with an Asian-American protagonist light[ing] up the screen.”

According to a study conducted by freelance writer Bethany Crystal, 21 out of 32 romance films have men in more powerful titles such as lawyers or businesspeople. On the other hand, the most popular positions for women tend to be “stereotypically feminine” with roles like princesses, cheerleaders, etc.

“A lot of rom-coms either over sexualize women or a lot of the time they are written by men,” said Lynch. “They really just make an over[ly] simplistic version of a female character, often for the male gaze.”

“I think that it’s a big step in today’s agenda,” said Marcus Nortey ‘23, president of the Black Student Union. “Including more African Americans and diversity as main roles in movies show that African Americans can do more than just be the bad guy.”

The film industry has made notable progress with its ability to portray more diverse characters through race, gender, religion, etc. However, the journey to inclusivity is far from over.

“A lot of the time it still ends up being white people, cis people [and] straight people who are creating these [films] and so they don’t really know how to incorporate it in the correct way,” said Lynch. “It’s really important to make sure that people who identify have a say on the films and are able to help.”