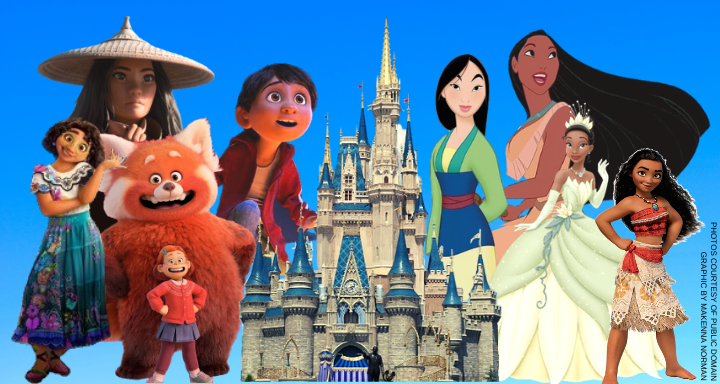 Disney has come a long way, recalling that for more than its first 50 years the company produced exclusively white protagonists and its storylines focused on straight romances, which mostly included a woman needing to be saved by a man.

Today, the Disney franchise works to include characters of different races and ethnicities, but more steps need to be taken to further diversify their films.

Efforts to increase racial and ethnic diversity in Disney intensified around the 2010s with movies such as The Princess and the Frog, Big Hero 6, Moana and Coco. Since 2021, three major movies have been released to diversify the franchise — Raya and the Last Dragon, Encanto and Turning Red. Even though Disney still has a disproportionate amount of white characters, the now frequent additions of diverse characters has already allowed many different stories to be told, and different races and ethnicities can be expected to be represented in future films.

In its efforts to racially diversify their productions, Disney has also represented a variety of cultures. Unlike most of Disney’s past movies, in newer films the setting, clothing and dialogue all contribute to portraying a recognizable culture. Movies such as Encanto and Coco not only portray Colombian and Mexican culture, but it’s an essential aspect of the movies’ plots.

Pixar’s newest movie, Turning Red, includes an Asian–Canadian protagonist, Meilin Lee, and tells the usually silenced story of a young girl going through puberty, including discussion of periods. The film has received some backlash from parents who believe the topic is too mature for younger children, but this story representing periods as a healthy, normal occurrence has impacted the way periods are viewed, helping to normalize openness on period–related subjects.

“Those who have periods can be as young as nine and as late as 15, so a nine–year–old being exposed to [periods] is definitely appropriate because it could be her,” said pediatric and adolescent gynecologist Dr. Robyn R. Miller according to USA Today. “I’m not saying it needs to be broadcasted for everyone to know you’re on your period. But I think as secretive as it is, it ends up having this undertone of shame associated with it. That shouldn’t be. We’ve had periods since the beginning of time, they’re very necessary.”

While Disney has made huge strides to racially diversify its franchise and tell stories that a large audience can connect to, there is still work to be done in terms of representing an array of sexualities and genders. For several years now, Disney has featured few queer characters, most of whom are minor characters that only subtly hint at their sexuality.

Disney has been somewhat successful in regards to queer representation recently, as Disney’s Cruella included character Artie, who is never confirmed to be queer in the film or by Disney, but is played by John McCrea who read and performed the character as queer.

Additionally, 2021’s Jungle Cruise includes confirmed gay character, McGregor, played by Jack Whitenhall. But rather than explicitly stating that he is gay, the character simply says that his “interests lie elsewhere,” which gets the point across to most of the audience but likely goes over younger audience members’ heads.

Both of these movies are rated PG–13, therefore not marketed or intended for younger children, and the movies that are made for kids are significantly less inclusive. Disney’s Onward included a brief scene where a minor character mentions her wife, and the live–action version of Beauty and the Beast includes just a few seconds of Josh Gad’s character, LeFou, dancing with a man.

Unfortunately, despite the show’s high ratings, its upcoming season three will be the last, consisting of three 44–minute episodes. According to the show’s creator Dana Terrace, the show was canceled because it “did not fit” Disney’s brand. However, Terrace believes this refers to the show’s serialized content rather than the LGBTQ+ representation.

Children in many cases are sheltered from sexuality and gender–related subjects. But understanding what it means to be LGBTQ+ can be incredibly beneficial for kids, as it can help LGBTQ+ children better understand themselves and can decrease bullying they might face from peers.

Especially now, with the recent passing of Florida’s “Don’t Say Gay” bill — known officially as the “Parental Rights in Education” bill — which prevents LGBTQ+ topics to be discussed in Florida public schools, it is important to maximize the amount of exposure children have to queer people and relationships. Disney portraying an LGBTQ+ character in a positive way could significantly impact children’s perspective on the LGBTQ+ community, in a world where proper representation is lacking.

But, the passing of the “Don’t Say Gay” bill actually did have an impact on Disney. Not only did The Walt Disney Company criticize the law and vow to help repeal it, it also inspired them to reinstate a kiss between two female characters that had previously been cut from the upcoming Pixar film Lightyear.

Although Disney has been dabbling with representing gay characters and relationships, the company has yet to portray a non–cisgender character, and it is unknown whether a transgender or non–binary character can be expected in the future.

Overall, Disney has done well to begin diversifying their movies, in terms of representing many different races, ethnicities and cultures, but it continues to lack adequate LGBTQ+ representation. Ultimately, Disney needs to include more queer and trans characters in order to be diverse and inclusive.

Teachers should allow students to keep their Zoom camera off