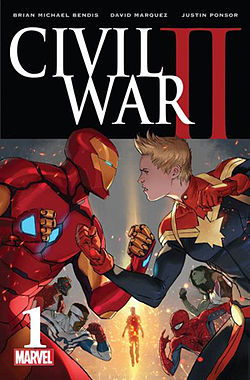 Between 1985 and 1986, DC comics released an epic that would change both its universe and ours: Crisis on Infinite Earths. While Crisis streamlined the DC multiverse into one seamless world, in real life, it only complicated things with the birth of event comics.

Crisis on Infinite Earths was a financial success for DC and ever since, more and more events have come from Marvel and DC. Event comics are mini series with tie–ins to other, ongoing series.

Since 2005, Marvel alone has released nearly 25 events, not counting crossovers or limited series without tie–ins. The problem with this frequency of events is both the cost and general importance.

Collecting comic books is an expensive hobby. Most comics today range between $3 and $4, but most event comics can be upwards of five dollars.

When you consider the fact that most events are between six and 12 issues, readers could be spending between $36 to $60, just for the event. Of course this does not count tie–ins. When including tie–ins, the cost can grow exponentially.

Take Marvel’s event Civil War II, a story about a man named Ulysses gaining the power to see the future with Captain Marvel and Iron Man fighting over whether to use his power to change the future or ignore his power and leave the future as is. If readers just wanted to read the even with no extra fluff, they would have to purchase $54 worth of comics over the course of nine months. Expensive, but nothing outrageous.

However, if readers were truly passionate about Civil War II, they would have to spend $569, not including tax, across 39 different series. The terrible part about that number is Civil War II is not even Marvel’s longest event.

However, most hardcore comic fans know what an expensive hobby collecting can be. Most just want good stories and don’t mind paying a few extra bucks if they can get those quality tales; and to be fair most recent comic events have been quite good such as DC’s Dark Nights: Metal or Marvel’s Infinity Wars.

“I personally enjoy Marvel’s numerous comic events as often times they lead to interesting stories that expand on other comic arcs and also allow readers to read about teams of some of their favorite heroes,” said comic book enthusiast, Ansh Rawat ’20.

Many event comics market themselves on fundamentally changing the way the universe operates, and while some do, most after–effects last for five years maximum, due to the frequency.

When every new comic promises to change the way the world works, that frequent change becomes the new normal and comic fans get tired of the empty promises. This is called “event fatigue” in most circles.

The solution is simple: just have less events.

Not only will less events mean less spending on events all the time and therefore a willingness to spend more on tie–ins when events do happen, but it will also make events more important to the universe as a whole.

If it becomes a 10 year wait between events, then each event will have a greater impact and have more importance leading to creative stories and a true shake up to the status quo.

In short, limiting the frequency of event comics will lead to improved and more impactful storylines in the future.

Sir, Please: The band of brothers