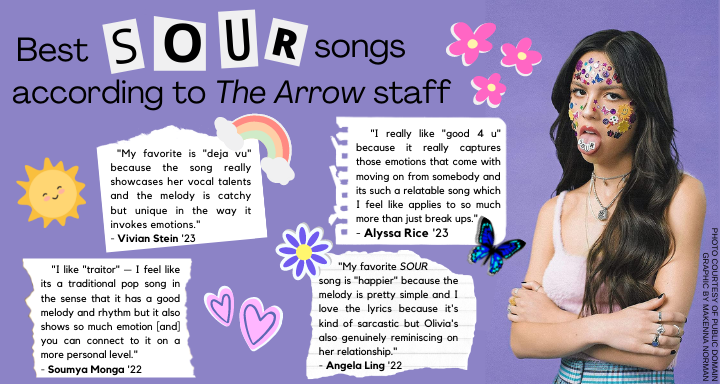 Since the early 2000s, we have seen several Disney Channel stars rise to incredible fame. Most notably, Selena Gomez, Demi Lovato and Dove Cameron all began their careers on Disney shows and, afterwards, launched successful singing careers or continued to act in larger productions. 19–year–old singer, songwriter and actress, Olivia Rodrigo, has been added to the list since her rapid rise to fame beginning in early 2021.

Rodrigo’s role in HSMTMTS kick started her career as she was able to showcase her singing talents. She wrote and sang “All I Want,” for her character, Nini, about her relationship struggles. But now, Rodrigo is focusing more on her music career rather than her role in the Disney series and, as such, will be stepping down in season three of the show, playing a recurring character as opposed to a main character.

“I have so much respect for [Rodrigo] as a songwriter and as a human and what her own dreams are,” said HSMTMTS showrunner Tim Federle. “[Rodrigo] is a massive part of our success, but season three is [to be decided] in terms of where Nini’s journey [will] go.”

On Jan 8, 2021, Rodrigo’s singing career skyrocketed upon releasing her first single “drivers license.” The song was instantly popular and set a daily global streaming record for a non–holiday song on Spotify; it was streamed more than 76.1 million times in the U.S. the week it was released. Rodrigo later released her first album, Sour, on May 21, 2021, which features “drivers license” and other instant hits such as “good 4 u” and “traitor”.

“I love writing music and I just feel so lucky that people are responding to it the way that they are,” said Rodrigo according to Entertainment Weekly. “It’s really my biggest dream come true. I love making art and making music, and I’m hopefully going to be doing that for the rest of my life.”

Rodrigo began her Sour tour on April 5 in Portland, Oregon. She will be traveling across the United States, as well as Canada and several European countries including Germany, Switzerland, Italy, France, Belgium, the Netherlands and the United Kingdom, with her final show being on July 7 in London. Tickets for Rodrigo’s tour went on sale on Friday, Dec. 10, and her shows sold out almost instantly.

“I tried to get tickets. I was upset [that I didn’t get them] because I’m in the top 1% of her listeners,” said Amrita Kumar ‘23. “I really like [Rodrigo’s] lyrics. Also, I like to sing too, [so] I really like the tone of her voice, and I think her songwriting [skills] and musicality in general is pretty genius.”

On March 25, 2022, Olivia Rodrigo: Driving Home 2 U was released on Disney+, in which Rodrigo travels from Salt Lake City, Utah to Malibu, California, performing rearranged tracks from Sour along the way. The film also shows some behind–the–scenes footage of Rodrigo working on Sour and dives into Rodrigo’s feelings behind her quick rise to fame while also reminiscing about her journey creating the album.

“I really wanted to make this film for my fans and especially my fans who maybe couldn’t come to my tour this go around,” said Rodrigo in an interview with Variety magazine. “Obviously, the songs from Sour completely have taken on a whole new meaning, and they kind of have a life of their own now, which I think is just a natural thing that happens when you put out music. But, it was really cool to go back and revisit the songs when they were just seeds of an idea, and they hadn’t become what they are today. [It] just kind of reminded me about the magic that songwriting is.”

“When I was 9–years–old I told my mom I would be an Olympic gymnast, even though I could barely do a cartwheel. She thought I was joking, and I got super defensive,” said Rodrigo in her acceptance speech for Best Pop Vocal Album. “So, the next week when I told her I was [going to] win a Grammy, she was very supportive even though I’m sure she thought it was just a little kid pipe dream. But, I want to thank my mom for being supportive of all my dreams, no matter how crazy.”